What a robot tought me about public speaking.

Today at the EY Global Mobility Conference there were two keynote speakers: Me – and a robot.

When I came into the conference ballroom and saw the very robotic looking robot standing there I said to the client, just half jokingly, “Today there is pressure for me to perform; if I get beaten by a robot in the evaluations I might consider quitting this job on the spot…”

The robot was there to highlight the rapid changes in the industries of AI, robotics and machine learning and the hosts of the conference used it to perform a “dialogue” between themselves and some (pre-prepared) answers from the robot.

Based on the robots “performance” I will reflect on what makes a “live”, as in “real, human, emotional” speaker great.

– Move.
This particular robot did not have the ability to walk and seeing “him” stand still in the corner of the stage through out the speech made “it” look very much like a machine. I am a big believer in walking around on stage. It should not be done “according to a plan” and it should not be “deliberate”, but a speaker should let himself (or herself) be “drawn” to different sides of the stage as the energy of the room dictates.

– Do not move too much.
This robot moved his arms around a lot while speaking. It was very distracting. Body language should support your “speaking-language” but not take over. Too much body language is like when the drummer (or bass player) of a band think they are too important and start to take over. All you are left with is a blunt message drowning out everything else. Same with hand gestures and facial expressions (and props for that matter) – use it for support, not as your main act.

– Do not give canned answers.
As it would have it the person who controlled the robot happened to press the wrong button making the robot look silly when it to the question: “What else can you help us with?”, replied “Thank you for inviting me to this conference. I wish you a great day.”.

Some speakers seems to go into a similar “canned reply” almost regardless of what the audience has asked. That makes them look like robots.
The magic in audience interaction is the fact that we do NOT know what is going to happen. Assuming that you do will just risk making you look silly. (This is important to remember since many, many times we CAN predict what the questions are going to be, making it extra important to pay attention (just like how it’s easy to have a car accident on a road you have driven many times, because you get fooled into thinking you “know” what is going to happen because you know the road so well.

– Interact with the audience.

The more experienced I become as a speaker the more sure I am about the fact that the one thing that makes a speaker great is how he or she interacts with the audience. The robot did not do that at all. And many speakers do not do it at all either. And speakers who do not interact at all might as well be robots – or videos.

Should there be a point of having a person live in the room speaking then make sure you make sure you use the most powerful rhetorical weapon we have as speakers: our ability to interact with other humans.

Those where some of the thoughts I got after going up on stage after a robot for the first time today.

ps. Will robots take over also the job of a professional speaker in the future?

They might very well, but we are not there yet. 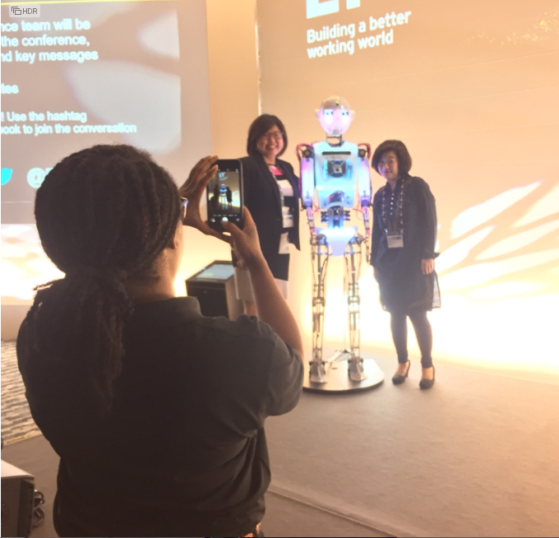