I did not do any speeches this week, instead I went on a one week vacation with my wife to San Fransisco to visit family, friends and to attend a wedding of a good friend.

I might not have been working, but I took any chance I could get to become better as a speaker.

An example: While in San Francisco me and my wife decided to go to Oaklanda stand-up performance with the cult comedian Sinbad.

I also attended the final game between the Golden State Warriors and Houston Rockets in the Oracle Arena. Well, technically the game was in Houston but the whole stadium in Oakland was full with fans who wanted to watch the game on the big screen jumbotron TV. 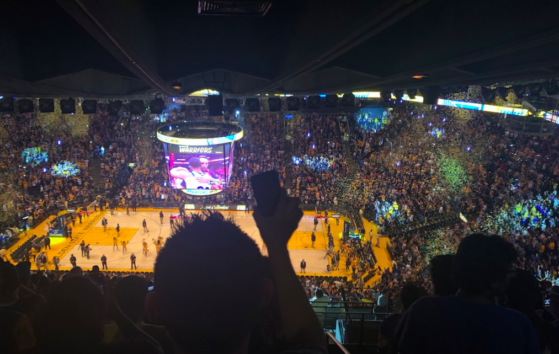 Watching Sinbad do his stand-up routine I was reminded about things like:

Watching a basketball game in a sold-out stadium where there was no team playing (!) I was shown the power of how the surroundings around the main event (be it – like in this case – a basketball game, or in my case, a speech).

It was fascinating to see how the audience would scream, cheer and boo even as neither team was there to hear it. It felt – almost – like being at the actual game.

(On this trip I also came up with what will, perhaps, be the theme for my next book, while sleeping in in our hotel room one day.)

But if we want to be on top of our game we have to think about speaking every single day. That is one of the things I love with this job: that we get so much time over to live a life we want, yet can spend so much time developing ourselves in the area – speaking – that we are passionate about.

The best of both worlds. Not just work-life balance. But work-life harmony.

Speaker observation: Time to do “background checks” as speakers.

The pictures in this blog posts are for two speeches that I have done in the last month or so.

One from a classic old hotel in Rome for a speech for Visa’s clients from EMEA.
And the other one from the iconic Waldorf Astoria on the Bund in Shanghai a few days ago where I spoke to the top managers at the global management conference of Permira.

Big LED-walls are of course not something new, but they used to be used only for big conferences with 500-1000 people in the audience because of the cost of setting them up.

I am writing this post because at both the Visa conference and the Permira conference the event managers joyfully told me: “The cost of getting a LED-wall was virtually the same as to get a traditional backdrop”.

I guess that means that we speakers have to get much more used to speaking in front of an LED-wall. (And as a speaker I can see that happening: In the last 6 speeches I have done 3 had LED-walls and 3 had printed back-drops.)

So what is the difference, you say? Not a huge one, but a few things to think about:

1) Less chance that the laser-pointer will work (the light on the laser pointer is just not strong enough to show up on the LED-wall) so if you are going to pinpoint something on stage be sure you have an alternative way of doing it.

2) More light behind you (so make sure you do not only do a sound-check, but also a light-check, especially if you are using a flip-chart where it becomes very important that the light facing the stage is strong enough)

3) If you are not using slides: Make sure you have a background picture that re-inforces your message, or that you at least approve of the back-ground picture they will be showing during your speech (Like in the picture to the left where they threw up a huge picture of the Chinese Wall behind the panelists, if you are panelist you would like to know that beforehand.)

4) If you are using slides: Ask to see the back-ground framing-picture that will be used around your slides (your slides will be “picture-in-picture” on a much bigger picture, be sure you know what that picture is. (I guess I am saying, do not only do a sound-check and light-check but also a “background check” 😉

6) If it is a big conference, or if you find out about the LED-wall early enough to make changes to your slides, check if the client wants you to leave the “safety” powerpoint slide and instead want you to go for the slide-deck that shows up on the full wall. (So add that question about “what kind of technology will be used for the backdrop?” to your briefing call list of questions.)

7) Realise that our audiences is quickly getting used to huge, animated, lit up stages – even for small conferences – and that puts different demands (and expectations) on us as speakers. No, it doesn’t mean we HAVE to have flashy animations in our speeches, but it does mean that audiences will expect it more and more.

That’s my thoughts on professional speaking this week based on what inspired me the last few days.

I am know as the “global conference speaker” who delivers keynotes around the world (spoke in 24 countries last year). But standing on stages and traveling the world is what you see, but what about those days when I am not traveling, and not speaking?

I thought it could be of useful to see what those “non-speaking” speaking days can look like.

Today was a typical such day. (This was written Monday 14 May) 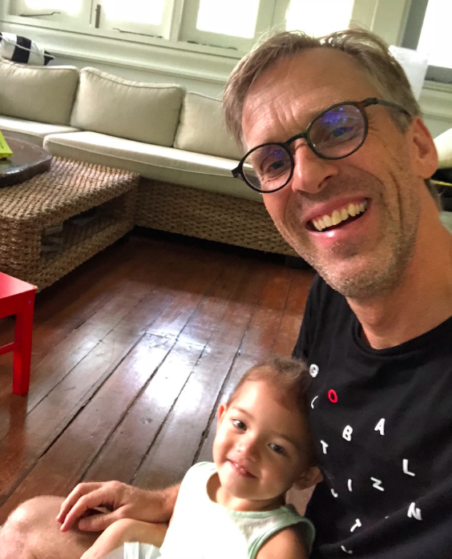 9:30 – 10:45 – Did an Inner Theme session (www.innertheme.com) with a speaker from Dubai who had flown in and wanted help to find clarity on the topic he should be speaking on. (we finished the session in the taxi to my client meeting to give him maximum time with me.)

11:00 – 12:00 Client meeting for a speech I am delivering on Saturday for a global bank’s IT department.

That is also where I drafted out the outline for this blog post.

14:45 – 17:30  Attended my son’s swim championships. I am father first, speaker second and have been on “50% (unpaid) paternity leave” for the last 4 years. I rather make less money and spend more time with my children when they are young than have all that extra income but wish I had known my kids better. Seeing my son’s face when he swam for the first time in a championship is priceless.

18:00 – 19:30 Eat dinner with family and put kids to sleep. I especially find that last 30 minutes before the kids fall asleep to be the most valuable parenting hour. Having them fall asleep knowing I am there.

21:00 – 10:30 A late night discussion with two speakers visiting from India, about how we can help develop the professional speaking business in Asia. Helping grow the speaking business in general is something I am very passionate about and something I put many hours of un-paid work into. I have been speaking for almost 1/4 of a century and I am now in the phase of my life where you give back.

Thus also the reason I am writing this blog.

Checking and replying to emails I did while in taxis going to and from different meetings during the day.

Now, there might not be a lot that looks like “sales” or “work” during this day, and that is the point. When I am not speaking I try to give myself time and space to meet inspiring people, to have time for my family and to help develop the speaking industry. Later this week I am flying to China for a big keynote for a global conference. But today was about what I do when I do not speak.