As I write this I can not speak.

I have lost my voice.

That is NOT good if you are a professional speaker …

I woke up on Thursday morning with a bit of a rough voice and by Thursday night the voice was totally gone. Not a sound came out when I tried to say something. 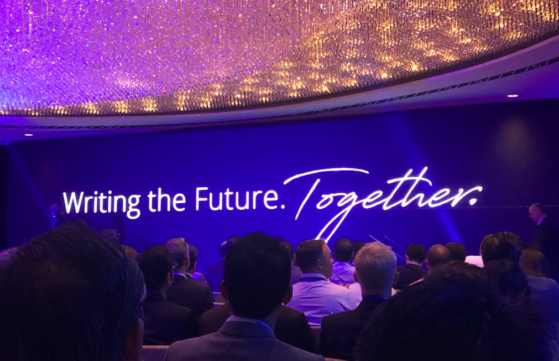 Over the weekend I have been temporarily mute as I have been avoiding to speak to rest my vocal cords.

Not speaking at all has given me time to reflect on my work as a speaker.

If I really did loose my voice and never could speak again what would I do?

My insight was that I would continue to spread my message just like I do today.

I am passionate about creativity, change and global/human mindset, my “Inner Theme” is “Humanity to the Power of Ideas”. I believe in the potential of humanity and the power of ideas.

If I never could speak again I would spread the same messages via videos, books, blog posts and perhaps a podcast where I would write down questions that the people I interviewed would reply to.

For the last 18 year I have replied with the same answer when someone asks me: “What do you do?”

My answer has always been: “I am a speaker”.

Sitting quietly in my home writing this I realise that that is perhaps not the best answer.

According to Eyomonline.com (An etymology site) the word “speak” apparently can be traced back to the “notion of speech as a “scattering” of words.”

And “speak” was not the primary word for “to speak” in Old English.

Instead the word “maþelian” was used:

“It has its root from metan “to meet;” compare Greek agoreuo “to speak, explain,” originally “speak in the assembly,” from agora “assembly”)”

“To explain in an assembly.”

A very cool etymology trace back in time through the history of the English language.

Because is that not what “Speakers” do?

We explain some aspect of the world to a group of people gathered together in one place for a common purpose.

Sitting here, not being able to speak any words, I realise that I am not a “speaker”.

Instead when I get the question: “What do you do?”

I should really reply “maþelie” – as in “I speak”.

And no, I will not really do that. I will stick to “I am a speaker”, but this text has not just been a play on words.

“To explain in an assembly.” is, if you think about it profoundly, what it really means to be a speaker.

We have a job where we have the privilege to stand in front of groups of other people gathered to listen to us explain something to them.

That is a huge honor and responsibility.

Let’s look at it as such.

Let’s be thankful for getting to do so.

And – from a person who can not speak right now – let us also be thankful for something most of us, most of the time, take for granted: Our ability to just open our mouth and express what is on our mind.

As a speaker, do not be easy to work with. (Professional Speaking. Episode 205.)

It’s 11 PM and I am standing in the Ballroom of the Fullerton Hotel the night before the global conference I have been booked to speak at will start. Tomorrow there will be people from all over Asia and Europe in the room, but right now the room is still in chaos. (As so many times before the client did not get access to the room until late the day before and people are scrambling to make it look perfect for the next morning.)

Earlier I had been invited to a “rehearsal” at 9.30 PM. The rehearsals started at 5 PM and went all through until 11 PM.)

I emailed the client and said: “I am ok to take the last slot at 11 PM  instead so that your other speakers can get done earlier and go back to their hotel and get a good nights rest.”

The other speakers where internal.

By offering to take the “worst” rehearsal spot I was helping the other speakers out and also the event manager.

Event Managers and internal speakers have so much other things to think about at a client event. As the external speaker you are there to support the other speakers, and the event manager.

So as the external speaker: Do not just be “easy to work with” – instead “work on making it easy” for the client.

ps. Bonus tip: When I did get my rehearsal slot I did not use it to go through MY slides (I knew them already) instead I clicked through all the OTHER speakers slides to update me on what they would be speaking on before and after me.

How many keynote speeches should a keynote speaker have? (Professional Speaking. Episode 204.)

“Do you only have one keynote that you keep giving over and over?”

I get that questions sometimes and the answer is “No”.

Let me give you an example: On Friday I was invited to be one of two keynote speakers at The Singapore Institute of Directors conference. At the conference almost 1000 directors of Singapore companies gathered at Marina Bay Sands.

It is one of the largest conferences for business people in Singapore and since 2016 I have been invited to give three different speeches to the audience.

One one business creativity.

One on creativity in developing countries.

And this year on how and why you should develop a Truly Global Company.

That means that I have been asked to give three totally different keynotes to the same convention in 3 years.

Now each of these speeches are based on a book I have written. Each book takes at least two years for me to research and write.

That means that each speech has a lot of material that never makes it into any speech (Or another way of saying it: The research for one book can make it into many different speeches.)

And that means I could be invited back many times over to use other examples from my research. In a way I have almost infinite number of speeches I could give based on my research over 25 years. But people think I only have “one speech”.

Now I understand why that question comes. Speakers get famous (or at least well known) for a speech that they give (think Simon Sinek and “Start with Why?” or Sir Ken Robinsson “Does School kill creativity?”) and then they get asked time and time again to give that speech because the event managers have heard a speech they love and they want their audience to also experience this great speech.

So in a way speakers with great speeches get invited to give that speech to new audiences.

But at the same time speakers at the end decide what they say.

I love when people come up to me and say: “This is the X:th time I hear you speak and I always learn something new from listening to you.” (I actually got that comment from at least 5 people after the SID conference on Friday.) And at the same time the event manager is happy because they feel that their audience got to hear “that great speech” that the event manger had heard before and that he/she felt was so good he/she wanted it for his/her audience as well.

But yes, speakers with great speeches get invited to give the same speech because new event mangers want the speaker to deliver something that the event manger have already heard.

So how to balance the “create new material” and “perfect the perfect keynote”?

There is no easy answer to this question.

My anser would be that you need to do both: Always collecting new material and at the same time always keep perfecting your “main speech”.

A speaker that never adds new material will at the end get an outdates speech.
A speaker that always rewrites a speech from scratch will never get the time to perfect it.

For me the idea of writing a new book every 2-3 years on a topic I am interested in at the moment makes me develop a brand new keynote speech and make me feel that I am growing – while having a couple of keynote speeches based on my core values that are “evergreen” keeps me grounded and I have clients who keep coming back and ask for the same speech over and over again.

ps. I do limit the number of examples that are available on online video. (I believe in showing a lot of material online, but not all. By limiting the amount of speeches that people can watch online but yet sharing quite a few speeches on Youtube you again strike a balance between being open and keeping some things for the audience to experience as fresh.)