Here is something that makes me annoyed: Speakers who think that they have to simply their message just because they are speaking in a less “developed” country.

After having spoken in way over 30 developing countries (from China and India to the Philippines and South Africa) it is my firm belief that that is simply an arrogant and false premise.

The world has changed. And today I think you should just not assume that any audience is less knowledge than another just based on geographic considerations.

And yet I see so many speakers from the West doing exactly that.

Mansplaining is a new word about how (some) men have a need to explain the simplest of things to women in a condescending or patronizing way.

Perhaps we need a new word: “Westplaining”: when people from the “west” or “developed countries’ come to “developing countries” and feel a need to “explain how the world works in a condescending or simplistic way.”

I have spoken at creative conferences in countries like Bangladesh, Mauritius, Indonesia, Thailand, Malaysia, China, India and many other developing countries and I am always impressed and inspired by the creative minds that I meet there.

And a few days ago I did a speech for a branding conference in Kathmandu, Nepal. The conference was an other example of the high level of creativity, knowledge and aspirations of creative people in the developing world. 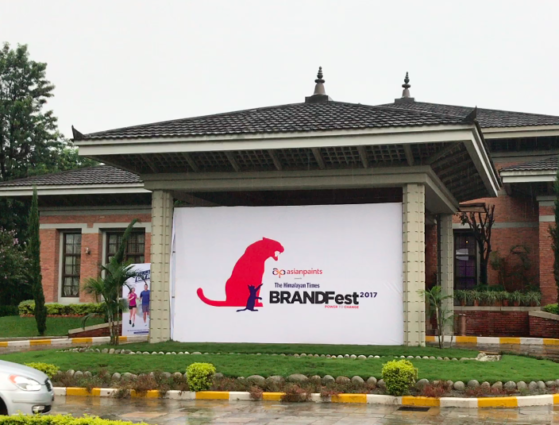 I did exactly the same kind of speech I would do if I was invited to speak at a creative conference in Berlin or New York. And it worked just as well.

So do yourself – and the audience – a favour: Never judge the competences of an audience based on the country they live in or the passport they hold.

ps. Here is a creative thing the organisers of BrandFest did; At the lunch buffet they had added a few dishes from with famous food from the country the foreign speakers came from. In my case they served: “Fredrik Haren Swedish Meetballs”. I love when conference organiser add these small, little extra details to a conference. 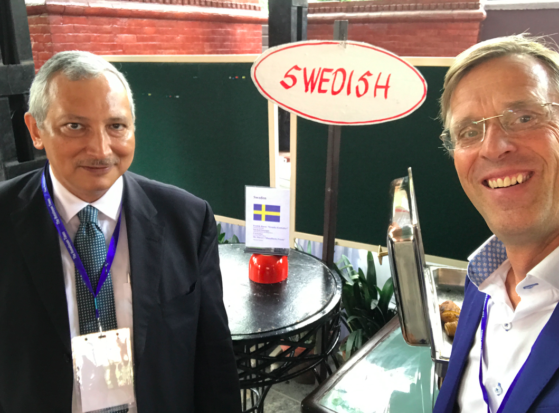 A few things the brand new world champion of speaking, Manoj Vasudevan, has thought me about speaking.

Manoj Vasudevan is one of the most humble great speaker I know.

I am so happy for him and it is so well deserved.
(Toastmasters have a staggering 352,000 members so to be voted the best is an almost unimaginable feat.)

I have learnt a lot about speaking from Manoj and am happy and proud to be able to call him a friend. (We both live in Singapore).

Manoj and I did a session together just a couple of months ago at APSS (AsiaSpeakers.org) on: “How to craft a keynote”.

In today’s post I want to share some of the things that Manoj has thought me about speaking.

Many speakers are happy when they have a good story and then just stick to telling that story, instead of seeing how it can always become better, always be told better.

Simple doesn’t mean bad. Simple means good. All great speeches have simple, easy to understand messages. Manoj is an expert in delivering a speech that has a simple message that people take to their hearts.

Manoj understands that the key to an audiences heart is to deliver a speech with a simple, but profound, message.

3) Be yourself and open yourself up to the audience.

Manoj has this ability to tell personal stories in a way that makes the audience instantly like him. They are full of humour, (often of the self deprecating kind), full of warmth and full of heart.

Many speakers seems to think that they need to communicte some kind of “guru”, “rockstar”, “celebrity” status in order to gain respect. You do not. In todays world people actually are no so impressed with that kind of behaviour anymore. People want to listen to real people.

I could go on forever, but I will stop at 3 examples, because Manoj is also a master of following the rhetorical rules of speaking and storytelling (where one of the rules is to always give examples in threes), so to show that I have learnt and listen to him I will keep my list to three too… 😉

If you ever get a chance to listen to Manoj speak I urge you to learn from him.

How much information should you give about a story when you are telling it?

I recently did a speech where I was speaking right after Michael JR, an American stand-comedian with a very high likability factor. (https://www.youtube.com/watch?v=0C7L5FEVgjA)

After he had done his speech I went up and delivered mine.

And when I was done we met behind the stage.

But I wanted more than just nice words to one and other, I wanted to learn from a master. So I asked: “As a comedian, can you give me some advice that I can use as a speaker?”

(I always think that the advice from comedians are the most valuable, even more valuable than from other speakers, since stand-up is one of the hardest forms of storytelling there is. To make another person laugh is serious stuff.)

Michael JR was kind enough to give me this advice:

He said: “I like how you tell your stories and how you include just enough information in them”.

I had never even thought about that aspect of storytelling so thanked him and asked him to elaborate.

He said: “When you tell a story you have to give just enough details so that the audience joins you in your story.

And then he gave an example: “Let’s say you start telling a story where about a car and you say: “I had this car..” then the audience is seeing a car in their mind, but it is not your car, it’s their car.

If you instead say: “I once had this blue car”, the audience is getting closer to “your car”.

If you say: “I once had this old, blue, Corvette” the audience now sees “your car” instead of a random blue car in their head.

That is what you want.

But if you say: “I once had a old, blue, 1969 Corvette convertible with licence plate XTG 578 and Michelin tires that I had bought from uncle Tom, who was born in Paris.” the audience is getting a very good picture of our car. The only problem is that the car is not the important thing, the story is. Or more to the point, the message of the story is.

So all the time you spend adding details to your story that doesn’t have to be in the story you are stealing attention from the message.

Tell as much you have to, but not more.

Move them into your story, and as soon as they are there: move on.