Speaking is a bit of a paradox: It’s the easiest job in the world, yet one of the hardest skills to master.

In one way it is really simple: Just go on stage and speak. Everyone – except a few mute people – can speak, so technically everyone has the basic skill needed to be a speaker.
Yet still we all know how the majority of speeches that we hear are uninspiring, boring, uninteresting or bad.
So why is that?
How can something so seemingly simple be so hard to do well?

I look at the art of speaking like the slogan for the game Othello: “Five minutes to learn – a lifetime to master”.

And every time I give a speech – or hear a speech – I try to digest what made the talk great, average or poor.

Now, after 20 years of being a professional speaker – the last 15 as full time speaker – and after delivering more than 2000 speeches and after sitting through (or watching online) probably 10,000’s of speeches of the most shifting quality I have come to the conclusion that the most important words to remember as a speaker are the words “affinity” and “rapport”.

Affinity means: “a natural liking for and understanding of someone or something: he had a special affinity with horses.”

Rapport means: “a close and harmonious relationship in which the people or groups concerned understand each other’s feelings or ideas and communicate well: she was able to establish a good rapport with the children | she had an instant rapport with animals.”

(Interesting how the dictionary chooses to exemplify these two words with a humans ability to connect to animals – but in the context that I am speaking about these words it’s about your ability as a speaker to connect with the audience.)

We often hear about the need for a speaker “to connect with the audience” – but I actually think it is the other way around: As a speaker you need to make sure that the audience connects with you.

You might not think there is a difference, but there is.
It’s subtle but it is there.

It’s like hooking up with someone in a bar: Walking up to someone can work well, but the more sophisticated technique is to give hints and send signals to the other person so that the other person walks up to you. The audience is a sensitive being – it doesn’t want to be picked up. It want’s to feel that it is in charge.

And that’s where affinity and rapport comes in.

As a speaker you need to get the audience want to like you.

When I say “like” I do not mean you should try to change who you are or what you stand for. Nothing screams “unlikable” as someone who is fake or artificial.

But what you can do is to try to find that connection between you and your audience.

Today I spoke for an insurance company called “FWD” with operations in 7 countries in Asia. In the briefing meeting that I had with the client I also got to know that they were just opening up in Singapore. A few minutes before the speech I ask to be introduced to the man running Singapore and ask him more about what kind of products they will be offering in Singapore. He informs me that they are going to offer a competitive travel insurance.

In the beginning of my speech I mention to the audience how I normally am not a client for the companies that I speak for (I give the example of how one of my recent clients was an Oil&Gas company and how my next client would be bankers in Luxembourg) and then I shared with them how excited I was to speak to this group because I had just found out about this great travel insurance they were going to launch and how I would sign up to be one of their first clients.

I then said: “I would not be surprised if, over my life time, you are going to make more money on me than I am going to make out of you.”

And then I smiled.

The audience gave me a applause, a friendly laughter and warm smiles.

They had connected with me.
I was not just a speaker there as a hired gun to speak at yet another conference.
I had shown interest in what they did, been convinced that they had a great product and decided to join their company as a client.

(It’s important that they really felt that I was going to become a client, and I am really going to ask them to contact me about their services when they are ready to launch.)

Lesson:
One of my strongest messages to people who want to be speakers is: “It’s not about you – it’s about the message that the audience takes with them” – and that is true.

And that you achieve by building affinity and rapport.

(Picture of an audience of one of my precious speeches.) 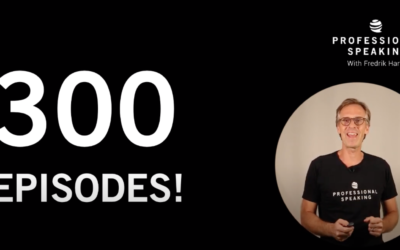