How to end a conference as the closing keynote speaker. (ProfessionalSpeaking.com Episode 224.)

Ten days ago I had the privilege of being the closing speaker at the Professional Speakers Summit – the first ever professional speakers summit in India. More than 150 speakers from all over India (and the world) met in Chennai to learn from each other.

As the closing keynote speaker I had to close the convention with a speech on how to become a global keynote speaker. But I also wanted to communicate a deeper message – a message of the value of putting into action the things the audience would have learnt at the convention.

So I decided to show – instead of just telling.

On the first day of the convention another speaker, the amazing professional photographer Amar Ramesh, had talked about the need for professional speakers to have a professional appearance such as hiring a stylist, having professional head-shots and a great showreel video.

Hearing him speak I went up to him and booked him right after his speech to do my 2019 headshot photos (Amar is one of the most respected portrait and wedding photographers in India and it seemed a great chance to have him take my new headshot pictures.) But I noticed very few other speakers went up and booked him.

So the second day of the conference at 8 am I had an idea:

I called Amar and asked him to bring his stylist to the convention. 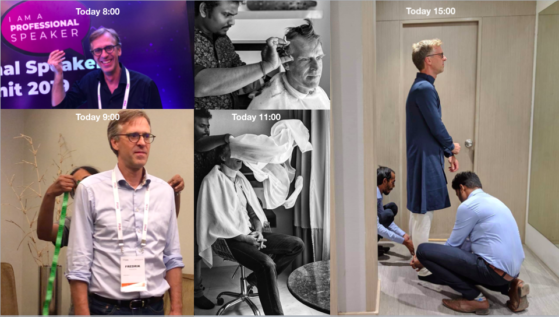 At 9:00 the stylist came and took my measurements.

At 3 pm I went to get the new Indian clothes fitted that the stylist had picked for me as they would fit to speak to an Indian audience.

At 5 pm I walked up on stage in a new outfit, with a new haircut and I told the audience: “The purpose of attending a speakers’ convention is not to just get inspiration and/or knowledge, but to turn that inspiration/knowledge to action, just like I took Amar’s advice about getting a stylist and one day later walked up here to you styled in a new outfit.”

The audience loved it.

Not only because I was standing in front of them in an Indian outfit, but because I “walked the talk”, I SHOWED in my actions the thing I was talking about. And I connected to the previous speakers from the convention by connecting to their messages in my speech. And finally they loved it because it showed that I had improvised and changed my speech based on what had happened during the conference – ie I had been paying attention.

If you are the closing speaker, make sure you are open to change your speech based on what happens before you speak. 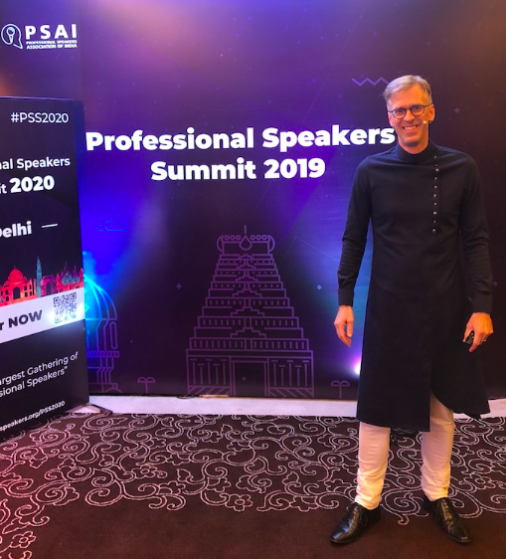