Today, I had the great pleasure of having my dear friend Derek Sivers over for a visit. Derek has one of the sharpest and most curious minds of anyone I know, and he also is one of the best speakers I have met. Derek masters the art of making an interesting point in a simple way.

One of his most famous speeches is a three minute (!) speech that he gave at TED with the title “How to start a movement”. If you have NOT seen the speech I URGE you to look at it – it is nothing short of a master piece when it comes to how to give a short speech.

The speech can be seen here: http://www.ted.com/talks/derek_sivers_how_to_start_a_movement?language=en

Now, Derek’s speech might LOOK simple – but I happen to know that there is nothing “simple” about making that speech look so simple. Derek spends a lot of time fine tuning his speeches until his point comes across in a simple way.

While sipping some coconut water in my living room, I asked him about his process of writing a good speech.

Derek told me that when he had written the speech down, he tested it on a few friends to get an “outsider’s perspective” to the message. As a speaker, you are so familiar with what you WANT to say that you might be blind to HOW to best get that message across.

In the case of the “How to start a movement” speech, Derek tested the speech on a friend who said: “That part of ‘the first Follower’ was a really interesting idea.” Before that comment, Derek had failed to fully grasp the power of the phrase “the first Follower”.

Derek: “That tiny line in the middle of the talk was what made all the difference.”

The rest is, as they say, browser history. Derek’s “How to start a movement” talk has created a movement of its own – the speech now has more than 4.6 million views!

Lesson: If you risk becoming blind to the message you are trying to get across, try your speech on a few people before hand to get a fresh perspective and an audience point of view. 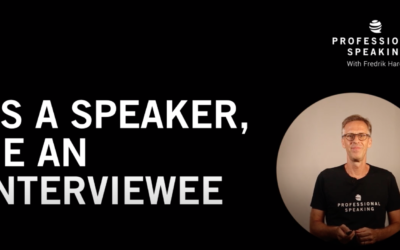 As a speaker be an interviewee (Professional Speaking. Episode 291)